You Have the Right to Remain Silent

And you can pay for your own attorney.

As the massive massive crisis in the Church continues to unfold, we have to admit that even us here at Church Militant, on occasion, have our breath taken away by the vastness of the evil.

It's the insanity — from the archbishop of Detroit getting caught in a pack of lies framing one of his priests for sexual abuse that the supposed victim himself denies ever happened, to now this latest report.

You'll recall that a week or so back, the Diocese of Buffalo announced it was closing the seminary there — a seminary that had proven to be an infestation of homosexuality and cover-up by the former bishop — the lying, cheating Richard Malone.

In truth, that evil stretches back decades, but just caught up to the diocese now.

Well, in response to the closure, one of the seminary professors was arrested for making death threats to local TV news reporter, Charlie Specht, who had done a masterful job exposing the corruption of Malone and the diocese.

A professor at the seminary was arrested by the FBI for threatening the life of an investigative TV reporter.

Yes, you heard that correctly. A professor at the seminary was arrested by the FBI for threatening the life of an investigative TV reporter.

The local media, and soon the national media, are having a field day with this. And, frankly, they should in light of active homosexual bishops, archbishops issuing public statements about innocent priests to frame them, seminaries having to be shut down because of the filth and bishops being removed from office after it all goes public.

Here is the TV news report from WKBW in Buffalo about the seminary professor and his death threats.

As more and more about the Church is exposed, we can expect to see more and more public shaming of our beloved Faith. This is the cost of having wicked men run the show.

For example, in the continuing saga of the corrupt archbishop of Detroit, the secular media has finally pounced on the story that Church Militant has been reporting for months.

Late last week, the local ABC affiliate caught up with parishioners who have filed suit against Abp. Vigneron and his corrupt chancery.

Once again, what do we learn here? What do we see? We see that it takes smashmouth investigative reporting, bare-knuckled punches to expose the filth, and sooner or later the secular media grabs hold of the story.

You can bet on a lot more of this in the coming days, weeks and months.

Hopefully, we'll be seeing some further arrests as well. 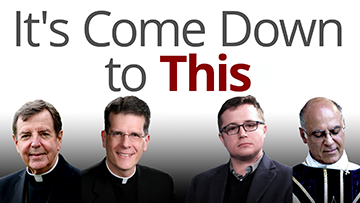 It’s Come Down to This
No justice!