Everyone wants to be accepted. It's part of our DNA as humans. This is especially acute in younger years — and we don't mean just childhood.

While there are many stupid things — immoral and illegal — that young folks can get themselves into, generally, society is able to chalk those things up to being the proverbial "young and stupid." Society invented that expression for a reason: because everyone does stupid things when they're young — again, meaning childhood.

But once the wonder years have passed and you've nestled into your post-adolescent years, stupid things can generally be much more harmful to you. So if you take guys college-age and up to about 10 years or so beyond, this can be an extremely dangerous time for young men.

Every age poses its own challenges and dangers — spiritual dangers — for men, but the very late teens and early twenties, because they come first, have their own unique dangers. Precisely since they come first, choices made in these years can have consequences that last for a very long time.

Young guys are less mature than older ones, normally, and as a result are more prone to making bad choices, morally and spiritually destructive choices. This is the age when things can seem overwhelming: the future, finances, relationships, including marriage, and, of course, being accepted by your peers.

Prior to your twenties, peer acceptance was important, but in a different way. You were still associated with home and school. All of a sudden, you are thrust into the great, wide world feeling very out of place. Everyone else has a handle on what's going on; you don't. They all seem goal-oriented; you have no idea what you want to do, how you are going to do it, and whom you might do it with.

Now is the time to recall what St. Peter says in his first letter: "Stay sober and alert. The devil is roaming about like a roaring lion looking for someone to devour." Satan knows you far better than you know you. He's been watching and tempting you for roughly 20 years. He knows your weaknesses, how you respond in certain situations. He knows what gets your gears grinding and how you will respond in stressful situations. He can't read your thoughts, but he certainly can read your actions, and just as we do with people, he's not often wrong.

While you are stumbling about looking for assurance, acceptance, self-confidence, he's plotting your destruction. He speaks to your imagination that faith and religion are stupid, pointless, outdated. You're young and virile, and sex feels great. You're your own man, can make your own decisions. You, after all, are an adult, and if you want to drink with your buddies and let your hair down and pick up that chick at the club, you deserve it.

That's what everyone does. Besides, she's not objecting; it's not like you're using her. She's using you just as much. It's not the 1950s anymore. Girls are just as free and loose with their morals as guys — oftentimes more, in fact. The guy friends you have, they all encourage you. Everyone is into a little hooking up. No big deal. What do you have have to lose? Maybe a little drama the next couple of days, but eh, so what?

It's so easy to hear it all in your head and so easy to go along with it. It all sounds so reasonable. So you give in, brag a little to your buds the next day; might feel a little guilty, but brush it off as your pals make jokes and laugh it off.

And one day — sometimes much sooner than you were expecting — you die, and you go to Hell for having turned yourself into someone completely self-absorbed who used others for your own gratification — even your buddies. Heck, you may have even had one or two "steady" girls, allowing yourself to believe you loved them, when in reality you loved yourself and your own needs, and they were convenient.

You'll die in your sins, and in what will seem like the twinkling of an eye, your former buddies will arrive in the fires of Hell where you will be waiting for them — only you will no longer be friends. They will seize upon you and you them. You will commence to tear each other to shreds, over and over again, rightly accusing and blaming and hating them and they you for each other's role in the the other's damnation.

You will have led each other down the primrose path, and in the process, straight into eternal damnation. You will each be damned and spew out nothing but hate toward each other. Your "love" will be revealed for what it really was all along: a psychological dependency to address some emotional malady you were too proud to turn to God to cure.

Here’s a closing thought that guys can plug into: Life really is black and white — this life and the next.  Reality really is true and false. And there really is in the end just Heaven or Hell — and it's totally up to you.

But then, down deep, you already know that. 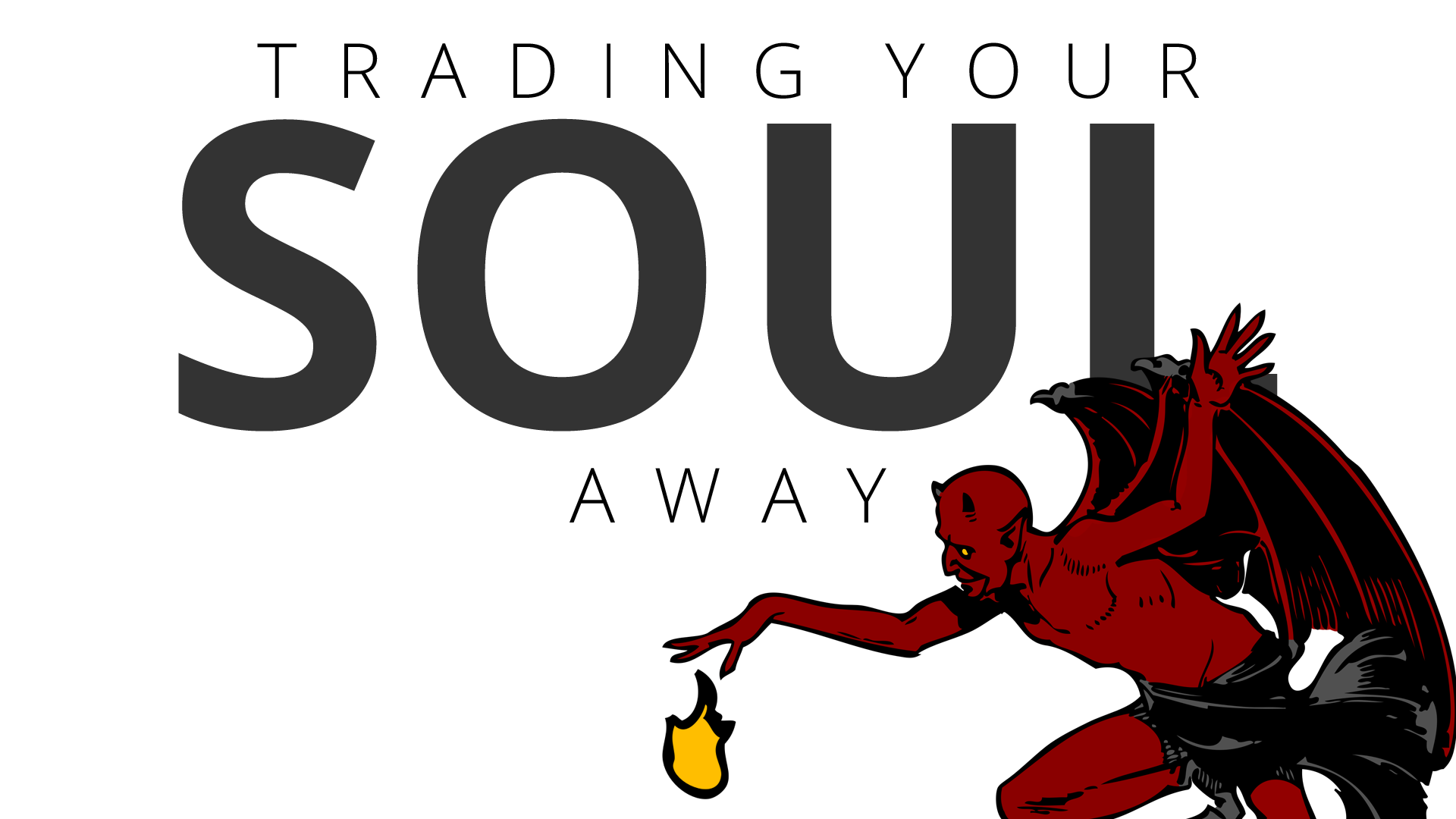 Trading Your Soul Away
Young men must fight like Hell to avoid it.