There is no vocation crisis.

Generations of Americans fought this evil in foreign lands, from Nazi Germany to dozens of proxy wars with the Soviet Union. We had a Cold War for decades with Marxist Russia. And especially for Catholics, remember, it was Russia that the Queen of Heaven came to warn her children about spreading error throughout the world. And the warning from our Heavenly Queen was spoken essentially moments before the Bolsheviks overran Russia and introduced Marxist atheism into human history on a scale never imagined, resulting in the murder of over 100 million human souls.

Socialism set in motion events that would lead to the persecution of hundreds of millions of followers of Christ, the destruction of the family, the abortion deaths of 60 million US citizens and over a billion humans all over the world.

When these types of young men do discern a vocation ... they are either screened out at application or chased out ... as being 'rigid' or 'intolerant' or some other psychobabble diagnosis — anything to prevent them from getting into the system.

Here at CPAC one of the most striking things you see is groups of young men, essentially everywhere here. These are young men who — like all red-blooded young men — are itching for battle, wanting to define themselves as being in the fight for a cause greater than themselves. These are sacrificial young men, stand-up young men who understand, if not all the intricacies of the war, the war itself. They know a way of life, the future of the nation, is at stake.

This is the next generation of young men, made of the same DNA of the previous generation who rushed to enlist in the military in record numbers after the 9-11 attacks. So here we have, hundreds of young men wanting to fight what boils down to evil. Idealistic perhaps? Sure — so what?

Idealistic young men fighting for truth and justice and the good and the beautiful is what we want. In fact, society depends on young men like this for its survival. When all is said and done, the survival of a nation is entirely dependent on young men ready to sacrifice all for the nation.

So let's transition along this line of thought now and look at the Church.

No faithful Catholic could walk around CPAC, seeing all these young fighters, and not wonder why some of these men — because some of them are definitely Catholic — why are they in this fight — the political war — and not in the fight for the Church.

Why aren't these young men flooding the seminary and fighting for the life of the Church? That is a pressing question. We are constantly hearing about a lack of vocations to the priesthood.

We can tell you, it's not because of a lack of young men willing to fight for the truth. There are hundreds of them here, crawling around everywhere. They have goodwill — so, so necessary for salvation because it is the pathway to the truth. Goodwill is the desire for truth.

So why is there such a dearth of young men willing to embrace the truth of Catholicism and dedicate themselves to a life of sacrifice?

Again, it isn't because there is a shortage of such men. They are here, and all over the country, by the tens of thousands — maybe even hundreds of thousands. But they look at the current condition of the Church, and see nothing — absolutely nothing — worth fighting for.

And why should they? Homosexual or emasculated men in robes, who far from just refusing to speak the truth, also lie, cheat, steal and perhaps even kill to keep their position — to protect their privileged status. What red-blooded young man finds any appeal in that?

Name one current bishop in the United States that any young man would look at and say to himself, "I want to be like him. That's my definition of manhood." Good luck!

What red-blooded young man who has even a remote understanding of the current state of affairs in the Church would want to submit himself to homosexual harassment in seminary, wimpy formation, politically correct catechesis, watered-down evangelization — you name it?

What young man, on hearing that good priests are subjected to persecution and harassment by a bunch of homosexual or political-minded bishops, would want to submit to that?

What young man who seeks to live a life fighting for the truth wants to step into a swamp of heretics and dissidents and weak men, all scrambling for more money and bringing in consultants to figure out how to manage the decline.

It's revolting that the Church has reached this point, but this is the natural outcome of what happens when sissified, vindictive, selfish, unfaithful men run the show. Young men who want to fight for the truth are simply turned off. No red-blooded young guy wants to grow up and be a bureaucrat, or a pansy or a wimp.

But that's the view young Catholic men have of the Catholic priesthood because that is too much of the reality. Let's face it. The lived-reality on the ground in parish after parish presents practically nothing appealing to a young male.

Across all of America, 481 men were ordained to the priesthood in 2019. There are that many young men here; in fact, probably double.

The truth is, for all their whining about not enough vocations, the U.S. bishops don't want young men like this is in the seminary.

There's another problem also: These young guys could never support —sign up to work, so to speak — for an organization that is down with the refashioning of America into a socialist country. But that is what the nation's bishop collectively want. They get rich from supporting the corrupt Democratic Party of Death, which is why they keep their mouths shut about abortion. They are for open borders, gun control and major changes in the life of the country to accommodate phony man-made climate change.

The truth is, for all their whining about not enough vocations, the U.S. bishops don't want young men like this is in the seminary. In fact, they are already terrified of these kinds of young men — independent, fighter, challenger of abuse of authority. What kind of quisling bishop — which almost to a man they all are — wants this kind of young man in a collar in his diocese?

That's why, when these types of young men do discern a vocation and present themselves to the Church, they are either screened out at application or chased out soon after being admitted, labeled as being "rigid" or "intolerant" or some other psychobabble diagnosis — anything to prevent them from getting into the system. Some slip through, but those are oversights.

Those few who do are going to have to have spines of concrete and nerves of steel, because the moment you step into that sanctuary and preach the unvarnished truth, you are going to become an "enemy of the State." And you can take that to the bank.

Ask yourself this single question: In the struggle for truth, why are so many many young men willing to fight the war on the battlefield of politics, while practically none will fight that even more intense battle in the Church? The question answers itself.

Any of these bishops who think they will escape judgment, or in truth, never even consider the question, are going to have to answer to the High Priest, why they stood in the way and prevented young men from being ordained who would otherwise be willing to fight for souls.

There is no vocation crisis. There is a masculinity crisis with the nation's bishops. 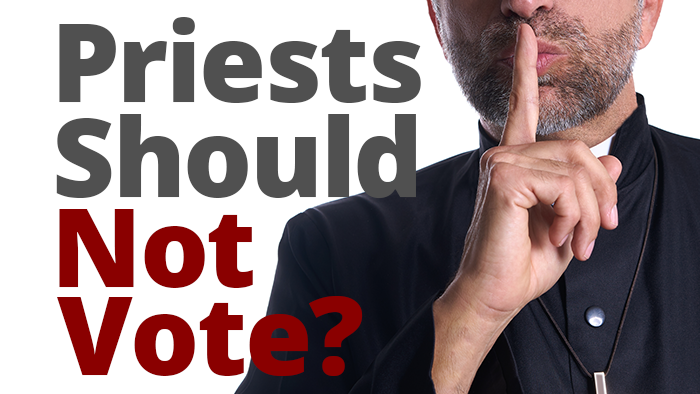 Priests Should Not Vote?
How incredibly un-American.