You’ve Got to Be Joking

Unfortunately, it's not a joke.

Sometimes, we are fed information here that seems hard to believe when we receive it. You could say it falls in the "shocking, but not surprised" column. We received one such piece of information late last week.

William Callahan, the bishop of the diocese of La Crosse, Wisconsin (now infamous for its handling of both the Fr. James Altman case and its cover-up of the Msgr. Grindr case), has the gall to now launch a $40 million-dollar fundraising campaign. This kind of shameless activity is off the charts. It's insulting to faithful Catholics, in fact.

Callahan has proven himself nothing better than a stooge for Blase Cupich — one of the most, if not the most, active destroyers of the Faith in the country. Cupich was the one who ordered Callahan to ice Fr. Altman, and, of course, being the weak male that he is, Callahan simply folded.

Don't the Catholics of La Crosse deserve transparency on these questions before handing over their donation?

You'll recall that what he got canned for was saying two things that were totally true: The churches should not have been closed during COVID, and Catholics cannot vote for Democrats. For that, he got shut down, removed from his parish and placed on ice. So much for a "listening Church."

But shifting over to the Msgr. Jeffrey Burrill case, he gets outed for being homosexual, chasing down hundreds of liaisons through a meeting app for homosexuals, yet he gets to disappear for almost a year and then is put back on a parish assignment.

There is so much wrong with all of this, it's hard to even know where to begin.

Callahan has approved this massive fundraising effort, and, as a normal course of events, when a bishop does this it's because he's called in and hired a slick company that puts it all together: the video, the glossy brochures, the messaging and so forth. But they do it for a 10% cut; that's the standard rate.

Is that what's going on here — spending $4 million to raise $40 million? Who's the company, if there is one (which, again, is standard operating procedure with bishops all over the country)? Does that company support Church teaching on homosexuality, contraception, sex outside of marriage and living together? Does its board believe in Who founded the Church? Do its employees contribute to the Democratic Party or Democratic politicians?

Don't the Catholics of La Crosse deserve transparency on these questions before handing over their donation, part of which would go to this outfit?

Even if an outside contractor/marketing company hasn't been brought on board, how does Callahan stand on camera with a straight face and ask for tens of millions of dollars from a small diocese when he willingly places a known active homosexual back into active ministry?

The reason males like Callahan and bishops all over the country even need to run these campaigns in the first place is because they have destroyed the Faith. They have created a corporate entity instead of the House of God, and they run it like that.

It's telling in his "give us money" video that one of the very first things mentioned is that a portion of the money will go to Catholic Charities. Seriously? Catholic Charities blatantly works to destroy America by serving as the travel agent for the millions of illegal immigrants that fake-Catholic Biden continues to sneak into America on secret, dead-of-the-night flights.

Catholic Charities runs that black-market operation, arranging the air transport, handing out the cell phones, providing staffers to meet and shuffle the illegals around and get them on buses and cars and scattered all over the country — millions of them.

Why do they need money from the shrinking number of pew-sitters for this? The whole thing is a scam.

The reason they all do this is that, in destroying the Faith so breathlessly, they have also caused a drop in finances and monetary support. Therefore, they put together pious-sounding videos, blather on about how the "Holy Spirit this, the Holy Spirit that" and then proceed to scam you.

Call it what you want, but don't say the Holy Spirit inspired anything related to a bishop that hides and lies about a massive scandal involving a homosexual priest. The Holy Spirit doesn't lie or hide anything. And to even remotely suggest that people should be open to Him while, at the same time, you shut the door on the facts is villainy.

Unless these men get revealed in media reports, they will continue on with business as usual.

But to go further and suggest people should give money to support all this, conveniently sidestepping the harsh facts, is galling. But this is how things run in the world of "Catholicism Inc." Don't give your money to this kind of rot and cover-up.

There will be no accountability or transparency, and you have zero assurance that the money will all be spent on everything that Callahan and the chancery say it will. For example, has the bishop ever said how much money was spent on Msgr Grindr as he was "praying and reflecting" after getting busted?

Unless these men get revealed in media reports, they will continue on with business as usual. That includes the actors as well as the leaders who give them cover. Why would anyone ever hand over cash to them for anything?

There must be a local pro-life pregnancy center run by good Catholics who could use your money instead. 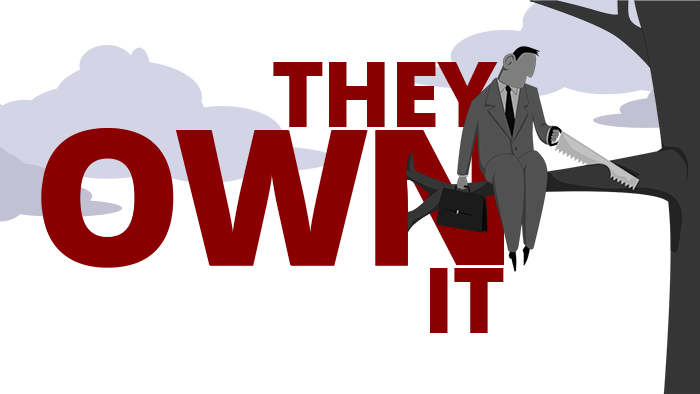 They Own It
Every last bit of it.